The Biomat is a product of modern technology with proven efficacy, crafted by highly skilled scientists and engineers.

Biomat:
Every day, our bodies and our minds are subjected to stress. This results in aches and pains, irritability and fatigue. Since 1997, the Biomat has helped thousands of those suffering from minor muscle and join pain all the way to arthritis.

Should the temperature of any part of the Biomat exceed the set temperature, the thermal sensors distributed throughout the Biomat will cut off the electric current. When the Biomat reaches the selected temperature, the negative ion lights will come on and will stay on until the Biomat needs to raise the temperature. The Biomat comes with an external control box which allows you to adjust the desired temperature and usage time (between 2, 4, 8, or 12 hours). As an added safety feature, when the controller is set to 122°F or higher, it will automatically step down to 113°F after 4 hours.

Recommended for:
Athletes, the elderly, the disabled, carpenters, office workers, construction workers, or anyone that has a physically demanding job.
The Biomat is a registered FDA medical device making it suitable for use in hospitals and therapeutic clinics. It is easy to use and safe to operate. Get pain relief at home and whenever you need it by owning a Biomat!

Specifications:
1. Far Infrared Rays - The combination of natural Amethyst and Hyron cotton layer generates far infrared rays (6-12 Microns) that the human body can easily absorb.
2. Negative Ions - Natural Tourmaline and the TOCA (Tourmaline) layer generates negative ions.
3. EMF - Special layers of fabric in conjunction with the Biomat EMG Interceptor effectively reduces electromagnetic waves. The Biomat EMF Interceptor acts in the same ways as a lightning rod by safely conducting the EMF energy away to the ground. With this feature, you can effectively reduce exposure to EMF for yourself and your family.

Far Infrared & Circulation:
Far infrared rays are part of the electromagnetic spectrum that has been studied for various health benefits. It provides warmth and relaxation similar to the energy that radiates from the sun. These rays not only benefit muscles on the surface of the body, but all cells in the deepest parts of the body. The warm stimulating waves temporarily increase local circulation. This deep tissue heating relaxes the muscles and tissues surrounding the joints relieving pain and discomfort.

Why Use Far Infrared?
The circulatory system is responsible for the delivery of oxygen-rich blood and the removal of wastes. Far infrared rays have been found to have a blood circulation enhancing effect in human skin and eventually induces an increase in temperature of the body tissues.

What is Thermotherapy?
Thermotherapy is the therapeutic application of any substance to the body that adds heat to the body resulting in increased tissue temperature. Thermotherapy also increases blood flow which facilitates tissue healing by supporting protein, nutrients, and oxygen at the site of injury. Studies have shown that a 1°C increase in tissue temperature is associated with a 10% to 15% increase in local tissue metabolism. The increase in tissue metabolism assists in the healing process by removing the metabolic by-products of tissue damage and provides the environment for tissue repair.

Increase of Body Temperature:
Studies have indicated that during thermotherapy, or hyperthermia, the body is exposed to higher temperatures which causes a significant increase in skin microcirculation, skin temperature and core temperature. Inducing an artificial fever can provide benefits to your immune system as a type of immune cell, or lymphocyte, called a CD8+ cytotoxic T-cell, helps destroy infected cells.

Heat Shock Proteins:
Heat shock proteins (HSPs), or stress proteins, are present in all organisms and all cells of all organisms. Published studies have shown that exposures to environmental stress, such as heat shock, induces the body to produce HSPs that function as molecular chaperones. Molecular chaperones are a type of protein that assists in the proper folding of proteins and quality control. Improper folding of proteins and damaged proteins have been reported to be the cause of a larger number of diseases.

Condition: Used yet good as new. 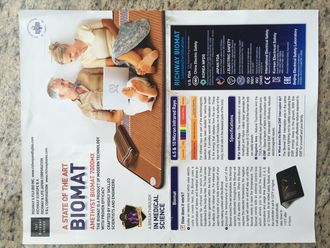